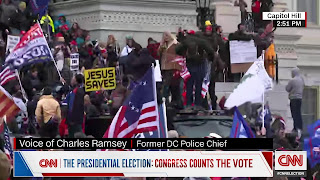 They call it a "mob mentality."

They thought he was going to be their leader.

They thought he was going to rule the country. It was an excitement that quickly fizzled out.

They wanted so badly for him to be the person who will set the country straight and free them.

Instead, there are charges brought up against him for deception, collusion with the nation's enemy, and maybe even treason.

This greatly angers his followers, so what do they do? They assault the officers and greatly injure one of them.

What was his response?

No. I'm not talking about Trump and his followers. I'm talking about the disciples and the others who followed Jesus. I'm talking about the ones who shouted, "Hosanna!" as Jesus entered Jerusalem. Peter refused to let Jesus be taken captive and put to death. Jesus rebuked him harshly. Still, Peter took a swing at the guards with his sword, aiming for the "headshot" with the intent to kill. The guard ducked and lost an ear.

They wanted Jesus to be the king of Israel to liberate them from the power of Rome. That's liberation theology. Today, that sounds like, "Jesus came to free the poor from oppression. He came to end slavery. He came to end racism." That is why the right-wing radicals stormed the capitol building. Their theology led them to believe that Jesus came to set them free from oppression of socialism. They believed he came to give them liberty and freedom-- something that the Democrats are taking away. Thus, they raid the building under the banner, "Jesus saves."

If you believe that Jesus came to set this world straight and implement a moral standard, you will be severely disappointed.

Jesus came to defeat death through His Resurrection so that we may have life. (John 10:10, Romans 8:11).

It is upon this Gospel that we stand and none other. Since Jesus' Kingdom is not of this world, then neither is ours. It is in that Kingdom that injustice has been put to an end. Quick update: that Kingdom is doing just fine. No one is overthrowing it. Jesus reigns supreme and is still on the throne.

Note: This does not imply that Christians are not called to stand for what is right and remain silent while injustice takes place (although "injustice" does need to be defined by Scripture). Rather, this is to clarify the purpose and intent of Jesus' incarnation. Not having a clear understanding of the Gospel results in Christians-- on both sides-- tarnishing the Name and reputation of Christ and His beloved Church. It leads people to a false gospel, which is no gospel at all.